After much consideration and research into both the available hay feeders for horses, the price range and the temperament of our horse, we decided upon the Hay Hut. Looking rather like a green igloo with eight windows, it finally arrived yesterday.

Blaze walked around and around it, could obviously smell the hay inside, but couldn’t quite bring himself to put his head in. Eventually I climbed in and tried tempting him from the inside. As soon as he was at least putting his nose through, I left him to it and when we returned from running errands the hay was gone and the hut had been moved a foot or so.

If you’re wondering why we did not choose the metal round feeders, which are much cheaper, but designed for more docile cows. I read a couple of stories of people who’d bought these for a horse, but the horse tried to climb in and got its foot stuck in the bars. In one case the whole hoof came off and the horse had to be put down. Needless to say, I didn’t want that for my big baby, but know him well enough to know that he would try and climb in there to get that last little bit of hay. He is the most curious horse I’ve ever known.

So, as soon as the rain stops, we’ll get him another round bale in there and he’ll be happy as Larry! 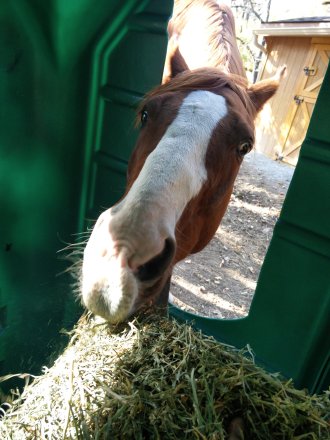 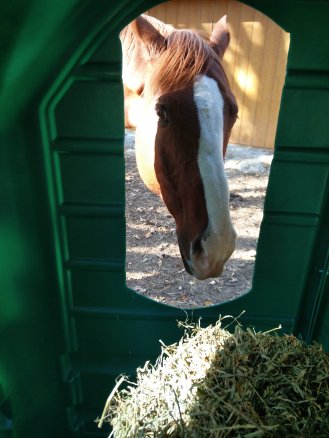