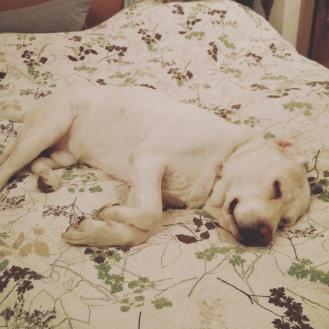 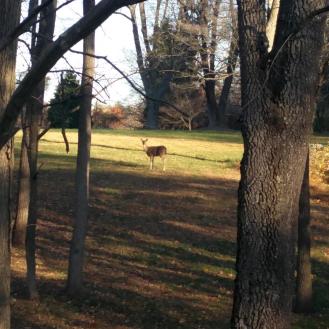 Living somewhere as beautiful as this, surrounded by wildlife such as the deer shown above, is wonderful, but also comes with its own set of issues. Namely ticks!

Our gorgeous English Labrador, shown having a well earned nap, has the unfortunate habit of snuffling amongst the piles of leaves that are, quite frankly, everywhere! I have  picked a few tiny, live ticks off him, but the other day I was horrified to find one after the other ENGORGED ticks on his head and neck. Panic attack!!

I had previously read up on using essential oils to ward off and to remove ticks, so I rushed to the computer again. I have a fairly extensive collection of oils so it wasn’t hard to find a remedy that used oils in my cabinet. Peppermint oil dropped directly onto the tick will immobilise it. Leave it for a moment or two to do its job, then gently but firmly remove the tick using tweezers, holding it as close to the dog’s skin as possible.

As soon as it’s removed, drop Lavender oil directly onto the “wound” where the tick was removed from. This will help prevent infection and will calm any irritation instantly.

There were FOUR ticks on our poor little fur baby (I’m using the term “little” very loosely, he’s over 100lbs! But despite not loving this at first, after the first one he just sat there and let me do it, very peacefully. They know when you’re helping them, don’t they?!

So, once removed, now it was time to figure out how to keep them off him for good, especially seeing as Frontline was clearly not working.

So there are two options. Both seem to work quite well. Eucalyptus oil on the collar, NOT on the skin. Rose Geranium or just plain Geranium Oil directly on the fur; just a couple of drops along the spine. Both methods seem to be working at keeping them off. Personally I prefer the smell of Geranium over Eucalyptus, but that’s just a personal preference.

All the above oils can be purchased at This Website