I have always loved honey, in all its pure forms – runny honey, solid honey, honeycomb….yum! I grew up in a small English town where most of your produce came from local farmers, including honey so I never knew anything else. The food industry never ceases to surprise me in the ways it tries to fool people into buying something they think is one thing, but in fact is a synthetic reproduction or at best an adulterated version of the real thing. You really do have to make yourself an informed consumer.

And yes, the FDA is at least partially at fault for this with their, as usual, lax rules for labelling. There is no rule that states that companies have to tell you if they are adding sugar, high fructose corn syrup or other sweeteners or indeed if they are processing the original honey in any way, which can include heat, filtering (which removes all the good pollen), etc. None of this has to be shown on the label, which is why when you see “Unfiltered” on the label you know it has to mean something good!

Honey is one of the few pure foods left and you can still get it, but you really have to be careful where and from whom you buy it. Local farmers markets, co-ops and health food stores are your best bet. Over 75% of jars of honey tested from supermarkets, drug stores and the little packets you get in fast food joints tested as having absolutely zero pollen left in them. (These figures are for the US, for the UK and Europe it seems to be less, around 20% quoted from some sources.) Now this poses two big problems:

Now, fortunately, there has been a rise internationally of local bee keepers and farmers markets, so I am sure you can find one or the other near you. Be wary of honey that is too crystal clear looking, there should be some cloudy or opaqueness to it, otherwise you are looking at heavily processed “honey”.

The benefits of REAL honey are wonderful, as is the taste. If you suffer from seasonal allergies, it’s almost a must, unless you are content to be on medication for that whole season every year. If you think of it like a natural vaccination, local honey works just the same way. You substitute the sugar in your tea for local honey, so a small amount on a daily basis – it’s just like the vaccination works – it’s introducing your body to the pollen that aggravates it so much in pollen season, but a little at a time, thus giving your body the chance to build up its immunity against it. It is NOT a quick fix. You cannot wait till pollen season, eat a jar of local honey and expect to be fine by morning. That’s not how it works. You need to start well before pollen season and introduce your body to the pollen little by little. Believe me, it works. But you have to stick to (a) pure local honey and (b) a little a day every day!

Honey is also one of the best natural remedies for coughs. It has been shown in numerous studies to be just as effective as over the counter cough medicines containing diphenhydramine and dextromethorphan. Personally I never use anything else. Why take a drug with its dozens of known side effects, when you take a natural effective remedy instead. Go back to what your great grandmother told you!

It is a great wound and ulcer healer; particularly Manuka Honey, which is honey specifically made by bees that feed on the Tea Tree plant in New Zealand (again watch out for fakes). Great anti-bacterial and anti-inflammatory properties are what makes honey good for this purpose – simply apply to the wound directly and reapply every 24-48 hours.

Honey  has great anti-oxidant qualities – and we all know how good antioxidants are at helping our body fight cancer cells and other diseases, like heart disease. Studies have shown that honey contains the disease-fighting antioxidant flavonoids pinocembrin, pinostrobin and chrysin.

Honey is also a great energy food making it perfect for athletes. Raw honey contains natural sugars (80 percent), water (18 percent), and minerals, vitamins, pollen and protein (2 percent). It provides an easily absorbed supply of energy in the form of liver glycogen, making it ideal for energetic morning starts and as a pre- and post-exercise energy source.

As with any other sugar alternative, it can be a great aid for diabetic blood sugar control. The average American consumes around 150lb of sugar a year, plus around another 62lb of high-fructose corn syrup. At least half of that is hidden in the food you eat – shocking isn’t it? You can take control somewhat by avid label reading and substituting sugar for things like honey, but we all need to push for the FDA regulations on food labelling to be much clearer for the consumer. There are no current regulations on labelling added sugars. In a strawberry yoghurt, for example, there may be 14g sugars on the label, but you don’t know how much of that in natural sugars in the strawberries or how much is added sugars. Unlike in Europe where they have to specify the difference.

Of course, honey is also just plain delicious. Try it with cheese, as shown, or in your tea, on your cereal, basically anytime you would normally use sugar you can experiment with honey as a replacement – your body will thank you for it. The benefits of using honey in place of refined sugar are overwhelming. Of course, you can’t be expected to do it with everything, but …every little helps:-) 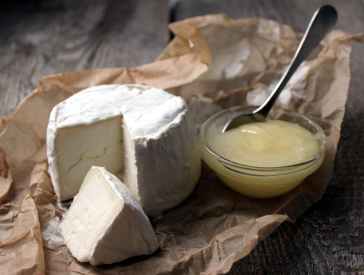